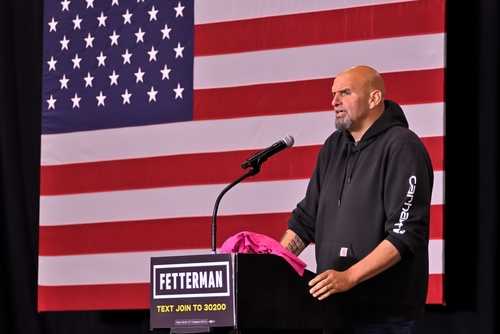 (PatrioticPost.com)- Last week, President Biden flew to Pittsburgh to check out the progress on the repair of the Fern Hollow bridge that collapsed in January. Democrat Senate candidate John Fetterman and his wife, “de facto candidate” Gisele Fetterman, also attended the campaign event.

Ironically, the day before the President was boasting about the progress on the yet-to-be-completed bridge repair after ten months, Florida Governor Ron DeSantis announced that the Sanibel Causeway, destroyed during Hurricane Ian, was officially reopened after only three weeks.

Biden believes that the nearly year-long project to rebuild a far smaller bridge is a symbol of his efforts to improve US infrastructure.

Just days earlier, Fetterman sat down for a one-on-one interview with NBC News in which he had to use a computer screen that provided closed captioning of the questions. The reporter, Dasha Burns said in her story that Fetterman had a hard time following a conversation unless he could read the words on a screen.

The entire corporate news media was outraged, shrieking that Burns was an “ableist” and excoriating her for making a truthful observation about the man who suffered a massive stroke just days before the primary.

To help bolster Gisele in the fight, Rolling Stone reporter Kara Voght penned a sycophantic puff piece about Mrs. Fetterman, describing her as the “de facto candidate.” In her article, Voght points out that John Fetterman often says nothing while meeting with supporters while Gisele is the one who took questions.

After the Fern Hollow Bridge event wrapped up, reporter Kyle Mazza asked candidate Fetterman if he was satisfied with the construction progress. But it wasn’t John Fetterman who responded.

Instead, Gisele told Mazza that they were there to celebrate and “we’re” not doing interviews.